The Virtual UCF Arboretum project is an augmented reality (AR) and virtual reality (VR) collaboration between The Harrington Lab in the Nicholson School of Communication and Media, in the College of Arts and Humanities, and the UCF Arboretum and Department of Biology, in the College of Sciences, and the Landscape and Natural Resources team at the University of Central Florida.

The Virtual UCF Arboretum website, release as version 1.0. in October 2018, is useful as a virtual plant field guide on any device that is also available on PBS Learning Media.  It features plants and flowers found in natural communities of central Florida. Each plant in the atlas has educational information, photographs, gardening facts, and a 3D plant model  ideal for close inspection of botanical form and structure. The 3D models are ready for use in VR using inexpensive headsets, and some are AR ready.  The website is unique in that facts and concepts are visualized in interactive 3D botanical models useful for education. All information has been vetted by botanists and biologists, and represents high quality educational information.

The Virtual UCF Arboretum Virtual Nature Model is an investigation and exploration of data visualization of sparse GIS data for plant density, and botanically correct, photorealistic 3D models, combined in real-time, interactive, multi-modal, game engine technologies with traditional multimedia.  It is unique in that it is the first of its kind to visualize GIS data of native plants and flowers, in 100 hectare (247 acres) of Central Florida terrain, and one that achieves high information accuracy, with photorealistic perceptual parity to match the real environment.  The Virtual UCF Arboretum as a Virtual Nature model, released as version 1.0 in October 2018, is available as an Unreal Game Engine level, open to exploration and learning at a click of a button. Available for free download and use on any Windows PC with a game or VR ready graphics card. Download Software here:  https://the-harrington-lab.itch.io/the-virtual-ucf-arboretum 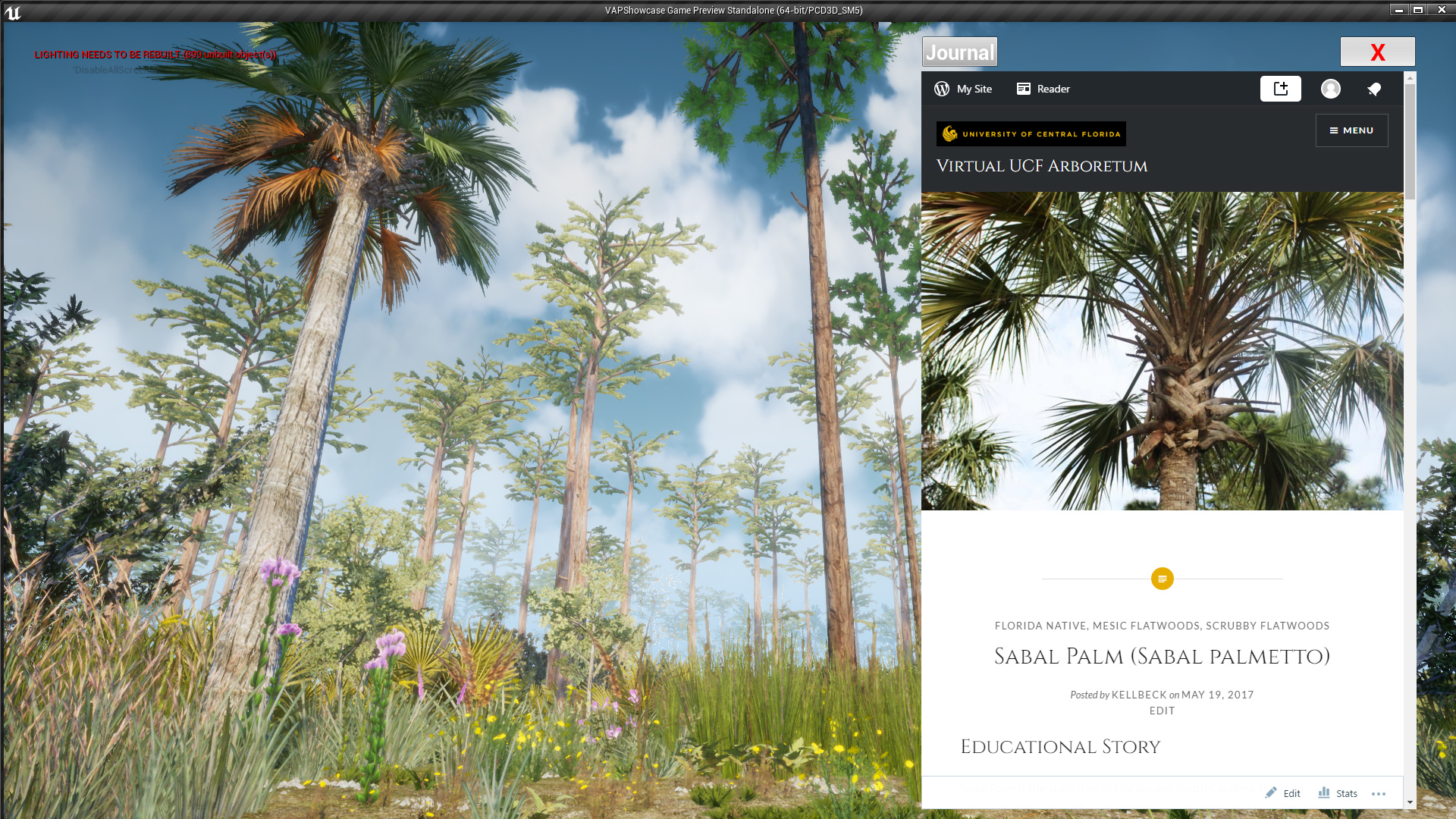 The Virtual UCF Arboretum research project (October 2016 – present) is under the direction of Dr. Maria C. R. Harrington at the University of Central Florida. For more information see The Harrington Lab website: https://virtualnature.org/

Primary Creators and Contributors for the Unreal and VR Engine model:

Past Members — engaged in learning and skill development:

Development of the Virtual UCF Arboretum website was under the co-direction of Dr. Patrick Bohlen, Professor of Biology and Director of the UCF Arboretum.